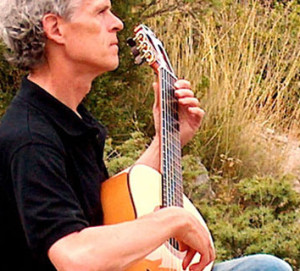 I work as a musician. I sing and play the guitar and a variety of other musical instruments. I began writing my own songs in the late sixties and never stropped since. I teach guitar and give courses and workshops ‘Vocal Arts’. This means singing, chanting, vocal improvisation and above all the art of re- or discovering your own natural voice. I also work as a ‘being-oriented’ coach.

I was born as the seventh of 15 children. When my brother started playing the guitar I started playing too and have been doing so ever since. Playing the guitar and singing became very important to me. In a rather harsh, though not loveless, educational climate it gave me a ‘place of my own’.
The first ensemble was (of course) a family folkgroup. (Tail Toddle) Later I played in a variety of bands and other ensembles. (see elsewhere on this site)

Mindfulness in playing music and singing has always been of the utmost importance to me, both as a musician and a teacher. I find this is lacking dramatically’

I love to study, though not so much in the way of formal education but the ‘school of life’.
EDUCATION

Masterclasses Flamenco
Paco Peña at the conservatory of Rotterdam

Then I worked as a guitarist in a prof. band for some years